David Jones Sigurdsson, CEO of Sigurdsson Contstruction,
is a Love Scammer from Zimbabwe (Active as of January, 2023!)

We have been following the scam tactics of a professional “love” scammer in Zimbabwe for more than two years.  We’ve found breadcrumbs that have helped us identify at least 37 fake names and businesses he has used to scam older women out of hundreds of thousands of dollars.  In September, 2020 we heard from his latest victim.  She met “David Jones Sigurdsson” of Sigurdsson Construction in 2019.  While she has not yet shared many details with us, we do know that this love scammer has conned her into spending at least $25,000 dollars on him.  Some of this was to replace his laptop and other resources that were “stolen” when he was mugged in Cyprus while there on business.  This is a familiar story that Mr. Harare Zimbabwe love scammer has used with other women and other aliases (like Anthony Fausberg and David Aapro.)

IMPORTANT UPDATE: On January 2, we received 2 phone calls from a man who claimed to be David Jones Sigurdsson. This imposter threatened to sue us if we continued to call him a scam artist. HE IS A SCAM ARTIST!  He claimed to be calling from Boston and used the phone number 617-379-0612.

This African scammer created “David Jones Sigurdsson” some years ago and registered a business website as SigurdssonConstruction.com.  That site has been taken down but in early 2019 he registered the domain SigurdssonConstruction.co and restored the same exact website. (Screenshot below was taken May 10th and is still identical on Sept. 14, 2020) None of the projects listed on this site were carried out by this fake company. Also, in the last few years this Romance Scammer also posted a website on sigurdssonconstruction.business.site. As of January 16, 2023 it was active.

The sigurdssonconstruction.co  website claims to be in business since 2009 and yet, the domain sigurdssonconstruction.co was only registered in January, 2019. You’ll see below in Mr. Sigurdsson’s Facebook page, it says that he started his construction business in 1998!  Again, why was his domain only registered in 2019?  Also, for a construction company based in Boston since 1998, or even 2009, YELP.com didn’t have any reviews for this company, that is until “Mr. Harare Zimbabwe” read this very article and then created his own review!  Check out the review he posted and what WE said on it!  Visit: https://www.yelp.com/biz/sigurdsson-construction-boston-2. If you agree with our assessment that Sigurdsson Construction is a fake scammer’s business, please click the Yelp link and leave your own review! 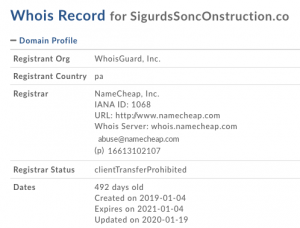 David Jones Sigurdsson shared many photos of himself with his latest victim.  With her help, we were able to locate Mr. Sigurdsson’s Facebook account.  What strikes us as very odd about Mr. Sigurdsson’s Facebook account is that he has NO RELIABLE information on it whatsoever! He has 5 friends and only 1 photo of himself: https://www.facebook.com/david.sigurdsson.7798/about_details  We took these screenshots on September 4, 2020. 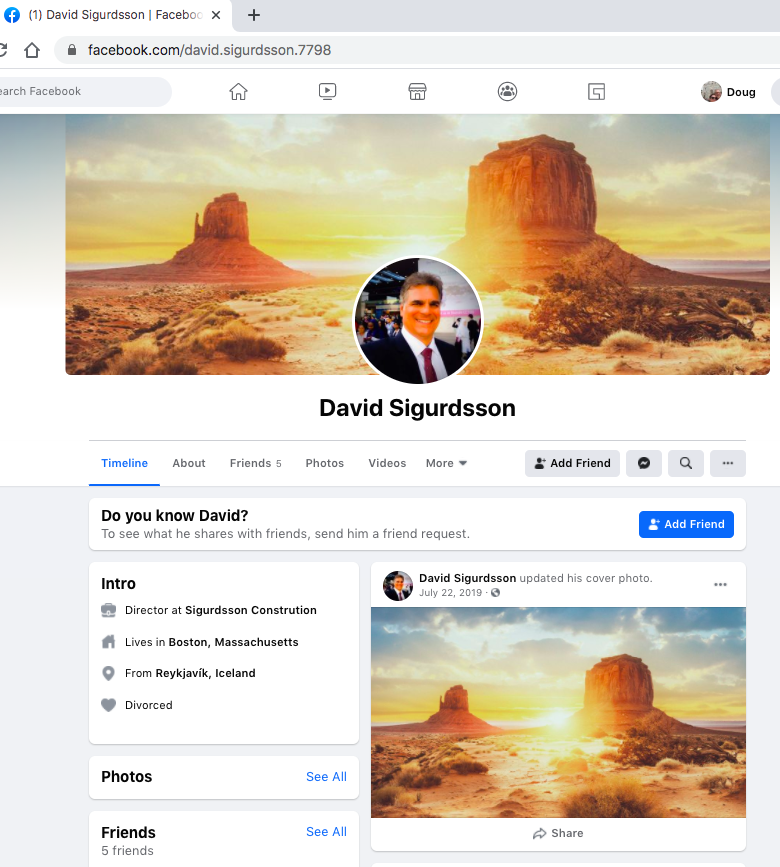 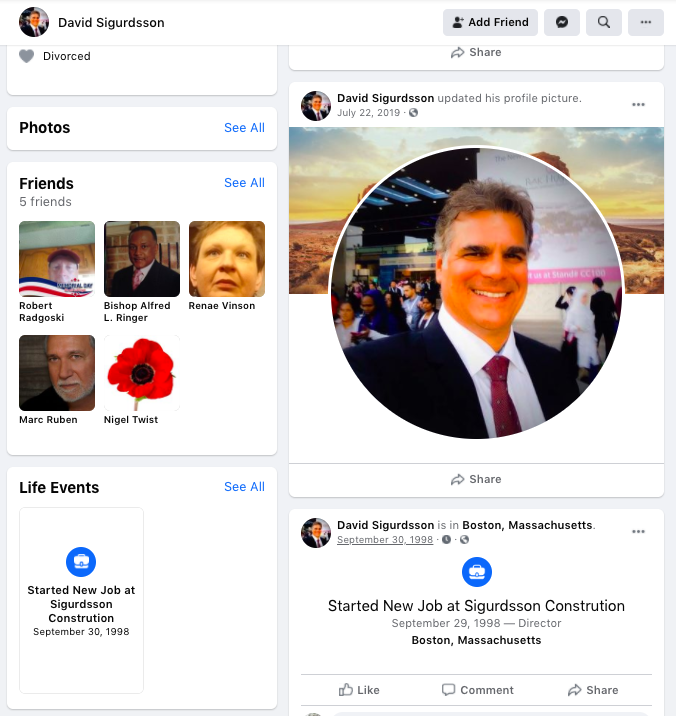 NOTE: It appears that “David Jones Sigurdsson” has also begun to set up another Facebook page in his name. However, as of January 16, 2023 it has no content, no friends, no reviews, no followers and NO PHOTOS….yet.

This scammer from Africa shared many photos with his latest victim, which she shared with us.  We were able to do a reverse image search and discovered that many of the photos he shared as “David Jones Sigurdsson” were found on an Instagram account identified as “MorganMack187” (on 9/4/20). 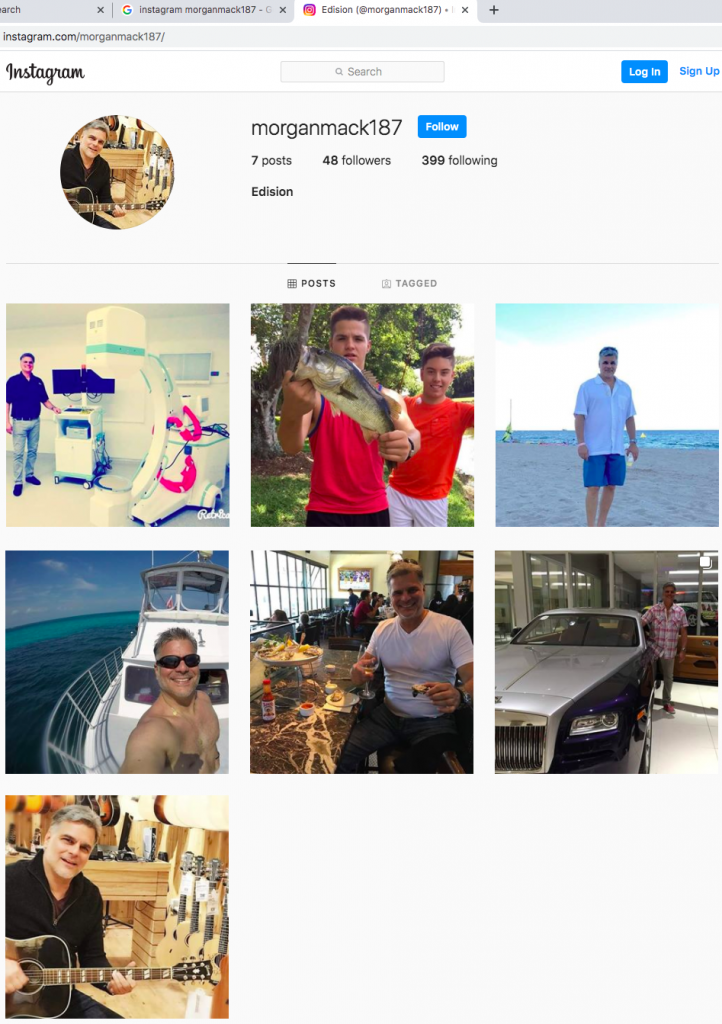 It turns out that both David Sigurdsson AND “MorganMack” along with other aliases are listed as scammers on the website Fake-Scam.info as being scammers.  Visit their page showing David Sigurdsson’s photos.  Another alias for this scammer listed on Fake-scam.info is “Richard Tromso.”

This love scammer has created several fake online banks that he has used to trick his victims into thinking he has hundreds of thousands of dollars in the bank that could be used to pay them back or invest in projects.  He created both of the fake banks TrustBankLLC.com and TrustBankLLC.co. (He may also be responsible for another VERY suspicious bank called  TrustOnlin.com that was registered in early 2019 as well.) TrustBankLLC.com was taken down many months ago.  When we visited TrustBankLLC.co on September 14, 2020 this is what we found and when we asked Google on September 4 to search for TrustBankLLC.co, it showed us no information leading anyone to believe it was a real bank: 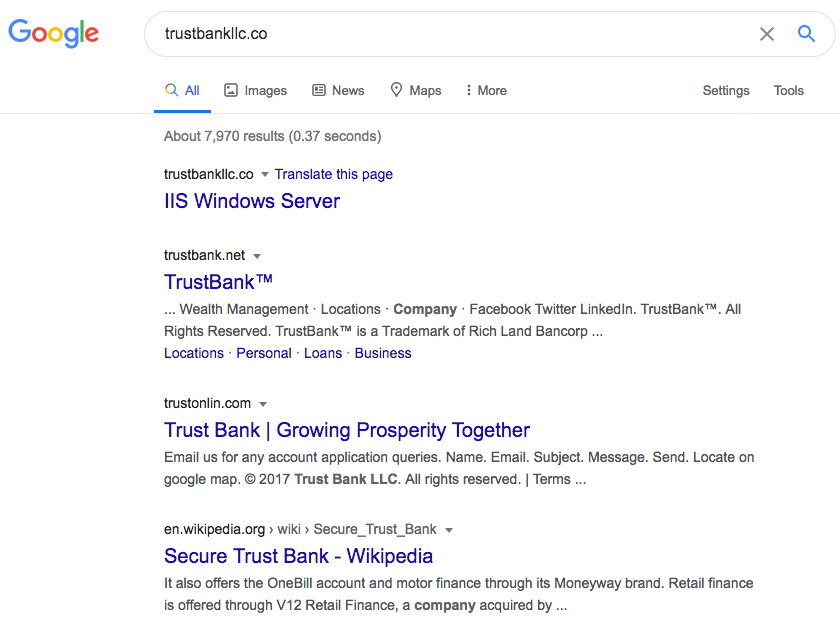 In an effort to convince the victim that “David Sigurdsson” was a real person, this scammer took photos of his Massachusetts Driver’s License AND his U.S. Passport and sent them to his victim.  However, we were able to show here that both of these documents had been photoshopped AND they contained mistakes that we were able to show the victim.  We will not show those photos or reveal the mistakes on our website because we know that Mr. Harare Zimbabwe visits our articles and tries to improve his scams by learning from what we post about him.

Beware of this fraud!