In mid-December, 2019 one of our long time readers sent us this email which she received from “Kimberly Winters,” inviting her to apply for a job with “Patriot Housing Corporation” — “one of the top” Real Estate firms in the country, said Ms. Winters. She was invited to click a link leading to their online application form which you can see below and click to enlarge. In this I9 employment application form, visitors will be asked to provide their full name, address, email address, date of birth, AND social security number! Our TDS reader smelled fraud, and so did we! 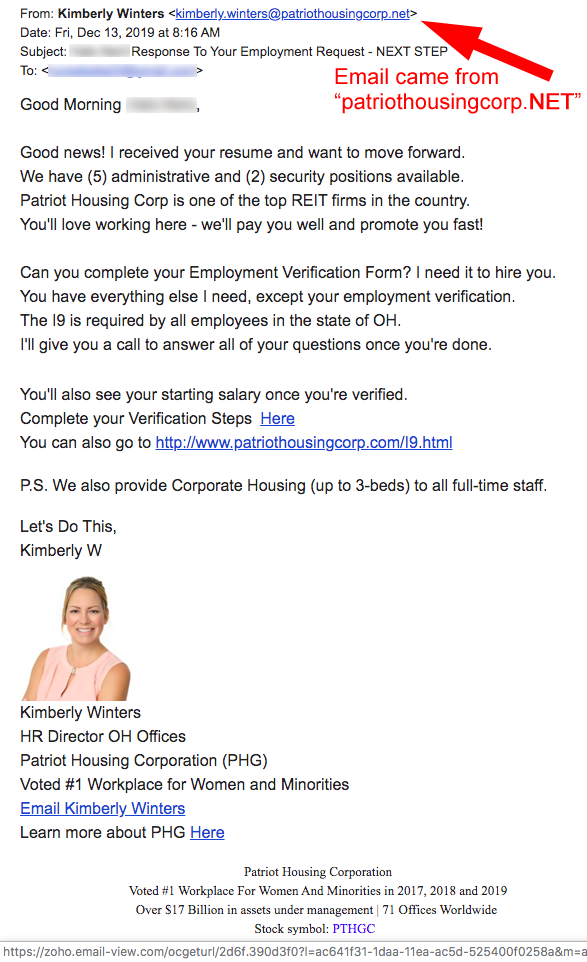 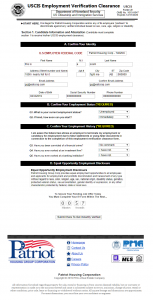 Who is “Patriot Housing Group Corporation?”  They clearly own the domains patriothousingcorp[.]com and patriothousingcorp[.]net.  However, it’s very important to note that they DO NOT own the domain PatriotHousingGroup.com.  In fact, the “PatriotHousingGroup.com” website has a disclaimer on their top page saying that they are not associated with Patriot Housing Group Corporation and they imply that this website is a fraud, intent on stealing people’s information.

Let’s begin by seeing what happens to your very personal information that you are asked to enter into their website application at patriothousingcorp[.]com/I9.html.  We opened the developer’s code for this online form and discovered that your personal information will be sent to a generic Yahoo email account called pinnaclegroup3444 “@” yahoo.com:

In fact, after clicking “SUBMIT” for the application, you’ll be sent to another “pending” form that seems to show an additional Yahoo email account that will receive your personal information as well: sun_advisors “@” yahoo.com:

This seemed extremely odd to us for this online application to send your personal details to generic Yahoo email accounts.  And who owns these domains? We used a WHOIS tool to see what we could reveal about the patriothousingcorp[.]com and patriothousingcorp[.]net domains.  Both domains were registered privately, revealing no information about the person who registered them. The “.com” domain was registered in July, 2018 (more than a year and a half ago) while the “.net” domain was registered in October, 2019.  At first glance, the PatriotHousingCorp[.]com website looked professional and representative of an actual legitimate business, filled with many links and resources… until we dug into it more deeply! (Click the screenshot to enlarge.) 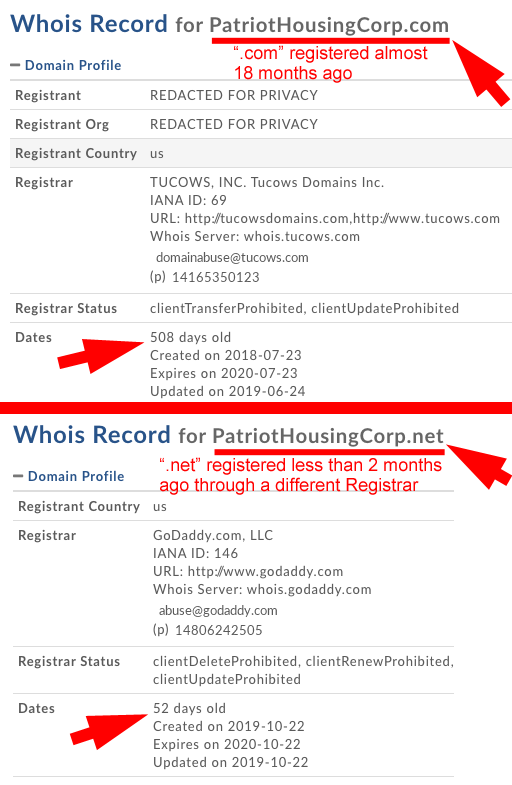 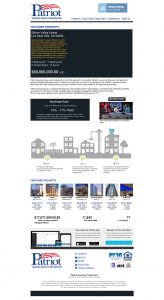 The first hint that something was not right about the Patriot Housing Group Corporation website was when our web browser showed us a warning that this website might be trying to steal our personal information! 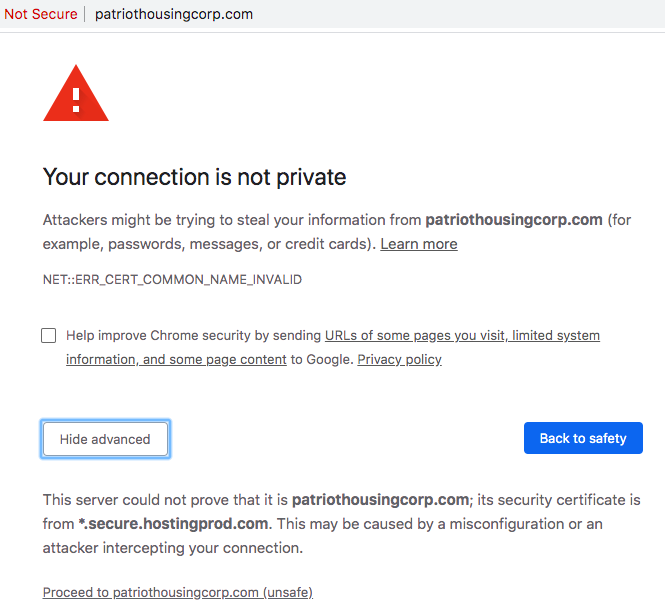 But we clicked “Advanced” and moved on to visit the site anyway, after using several tools to first verify that there was not likely any malware waiting to infect our computer!

On their rentals page of “Featured Properties” we saw many listings for real estate properties that included phone numbers and addresses.  Each was a link, as if we could take a closer look at the properties. But every one of those links pointed to the same missing graphic and returned an error when we clicked on it… 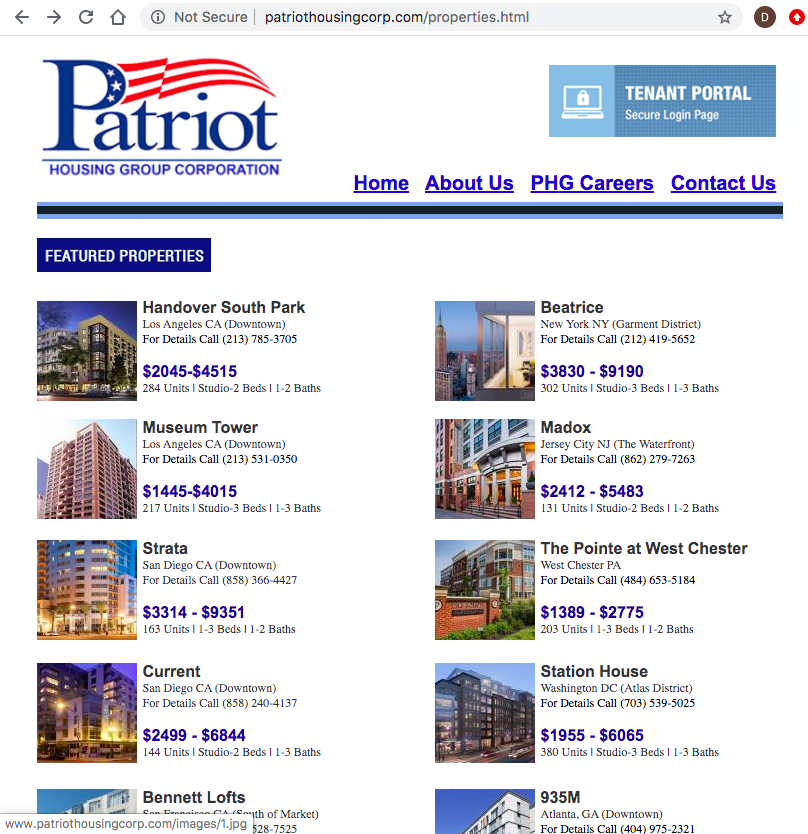 Next, we visited the “About Us” page and thought it odd that every single link pointed to someone else’s website.  For example, the “Tenant Portal” pointed to another Real Estate firm’s portal and the video link pointed to Fox news but the news was not about Patriot Housing Group Corporation.   Thankfully, the top of their page informed us that their founder, Chairman and CEO was a gentleman named “Gary Melvin.” However, our search for him on LinkedIn.com showed absolutely no such person.  We thought that was odd… 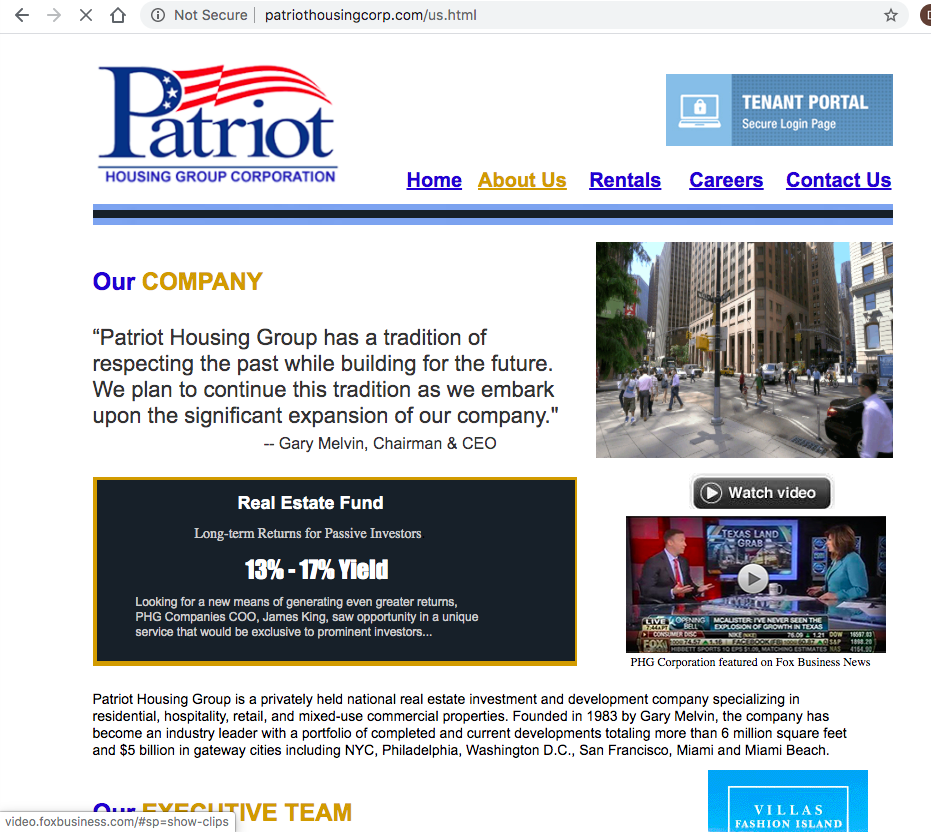 Fortunately, the Patriot Housing Group Corporation listed their “Executive Team” made up of four people:

Again, we turned to LinkedIn.com to search for these proud executives but found none of them!  We wondered… is it possible that these people are fictitious?  Could these photos be stolen from real people across the Internet and renamed? 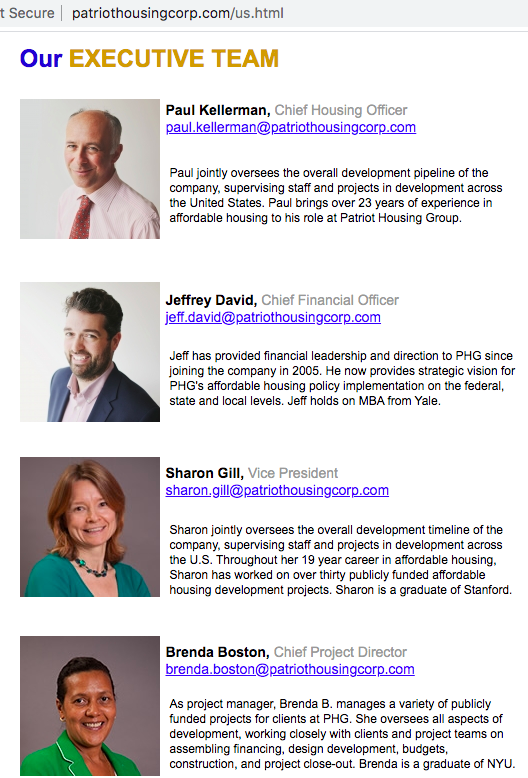 Fortunately, Google easily answered that question!  When we conducted an image search of these Executive Team photos, Google showed us that three of these four people are listed with different names and biographies on a website in the UK called “TechUK.org.”  Check it out yourself!  Visit this “Staff” web page at TechUK.org and scroll down until you see these people!  It turns out that “Brenda Boston” is a woman named Elizabeth Cobbson. “Sharon Gill” is a woman named Sharon Clews and the Chief Housing Officer listed as “Paul Kellerman” of Patriot Housing is really named Joulian McGougan.  All three images were stolen from the TechUK.org website.  We suspect that the fourth image was taken from this site as well but, perhaps, this man no longer works at the TechUK.org website and thus his photo was removed.  We’ve reached out to these 3 individuals at the TechUK.org website for comment and are waiting for a reply.

The “About Us” web page at PatriotHousingCorp.com also says “Patriot Housing Group is a privately held national real estate investment and development company specializing in residential, hospitality, retail, and mixed-use commercial properties. Founded in 1983 by Gary Melvin, the company has become an industry leader with a portfolio of completed and current developments totaling more than 6 million square feet and $5 billion in gateway cities including NYC, Philadelphia, Washington D.C., San Francisco, Miami and Miami Beach.”

And so, for good measure, we visited websites in New York, Pennsylvania and Florida that list the names and companies of LICENSED real estate agents and firms.  We searched for these four Executive Team members and their company called “Patriot Housing Group Corporation.” Guess what we found? BUBKIS!  NOTHING AT ALL!  None of the licensing websites know anything at all about this business or it’s team members. Here are just 3 of the many search results we conducted on these sites…. 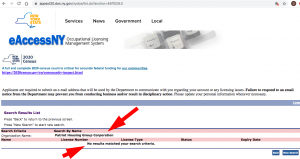 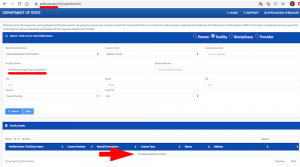 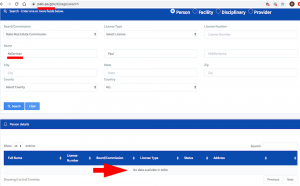 By the way, when we completed the I9 job application form on this website with made-up information, we were then directed to a “Conditional Job Offer Term Sheet” complete with salary and an opportunity to select our benefits.  (See the screenshot below.) This Job Offer web page also included a link to a credit card offer from a bank. This also seemed very odd.

The lesson to this fraud should be crystal clear…. NEVER, ever provide such detailed personal information about yourself to any job website without investigating it to determine whether or not it is legitimate.  If you have been one of the people who have given your personal details to this website or other suspicious websites, we strongly urge you to notify the Social Security administration through this US Government website, or call them at the phone number listed on this Taxpayer Identity Theft website.  You should also contact the three credit reporting agencies to have your credit locked down so no one can open up accounts in your name.  The contact information for the credit reporting agencies can also be found on the Taxpayer Identity Theft website.

By the way, on the Careers Page of this scam site called Patriot Housing Group Corporation is a photo and quote from someone identified as “Danny Miller, VP of Retail Acquisitions.”  His real name is Robert Klein and he is a realtor for Realtor.com in Little Rock, Arkansas.  Don’t believe a thing you see on the PatriotHousingCorp website! 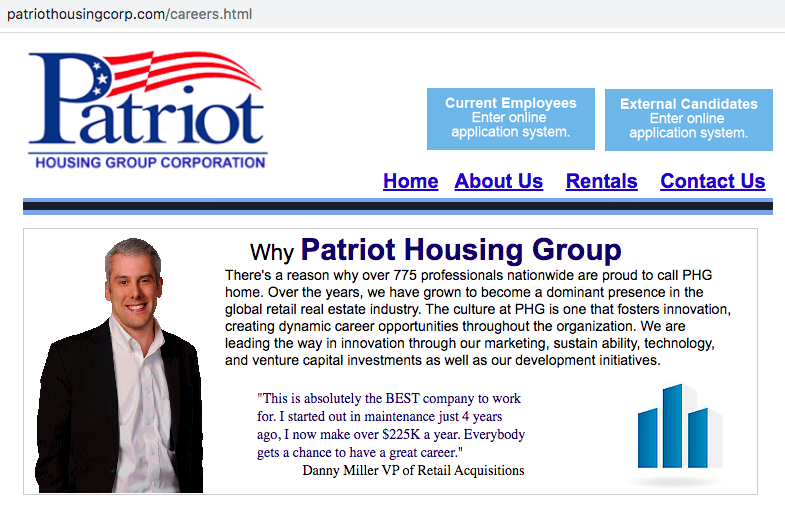 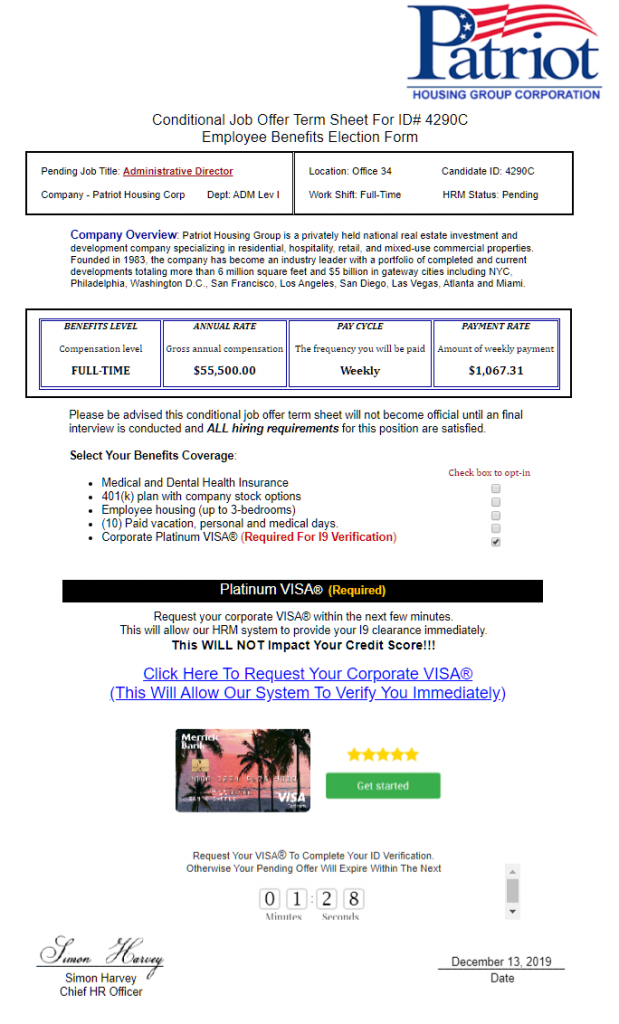