The man (or team) whom we traced to Harare, Zimbabwe continues to target women aged 50 – 65 with his “love” scams by building fake relationships with them online and then creating a pretense to ask them for money.  Fortunately, it didn’t work this time.  On July 29, 2020 we heard from a woman we will call “Karen” who met “Michael Hills” several weeks earlier in the international online dating service called Zoosk.  This is a link to this scammer’s fake profile on Zoosk as of August 1, while pretending to be Michael Hills. His profile is called “coolhills, 60” (You’ll need a Zoosk account to view any profile but we have screenshots below.)

These are just three of the nine photos that “Michael” sent to Karen: (Click to enlarge.) 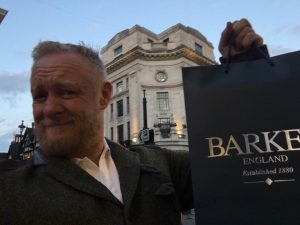 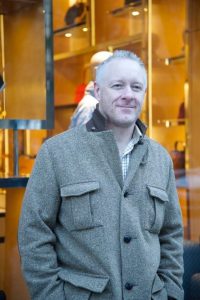 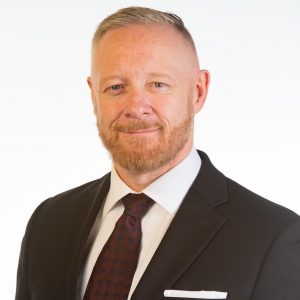 Michael Hills claims that he lives in New York city, not terribly far from Karen. While communicating with Karen, Michael used two different phone numbers (647-957-5773 and then 646-948-3002) and the email address: Michaelhillsinc@yahoomail.com. (Also: michaelhillsinc@yahoo.com) (NOTE: Other women have also reported that this scammer uses the email address: hillsinc@icloud.com) What made her most suspicious was that Michael, who claimed to have a construction company called “Hills Inc Construction,” was starting a hotel/apartment building project in Istanbul. He asked Karen to invest in the project and told her not to talk to anyone about the investment.  That is a MAJOR red flag!  As proof of this project he sent her a picture of a signed “contract” for funding it. However, a close look shows that the contract is clearly phony.  Let’s start with the simple fact that no contract worth $5 Million dollars will be a single page contract, requiring only 2 illegible signatures and no detailed contact information or legal language detailing WHO is responsible for WHAT. If you look carefully at the contract sent to Karen, it is easy to see signs of fraud: 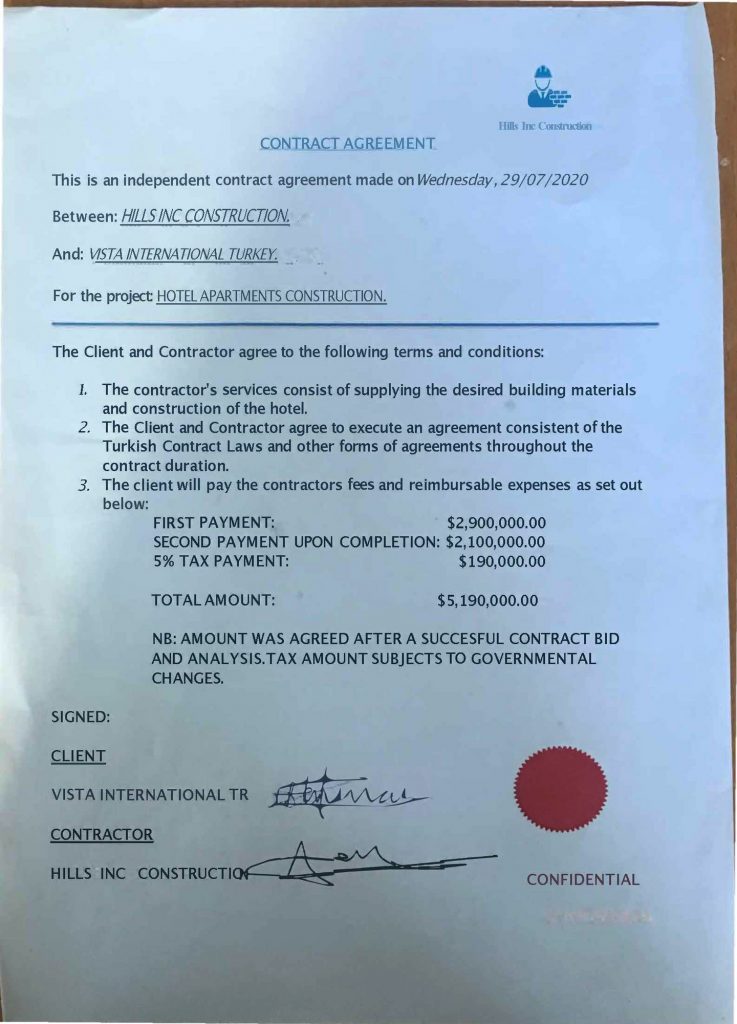 Karen told us that every time she asked Michael for a selfie he only provided a previously taken photo from his camera roll. When Karen asked for full body shots in a mirror, showing him taking a photo of himself, he always had an excuse why he couldn’t do that.  As Karen said, over time “things just don’t add up” in his story.  Of course, Michael professed his love for Karen and told her that he would be coming to visit her on August 8th but she didn’t believe him.  None of this added up because “Michael Hills” didn’t exist, even though he sent Karen a photo of his passport as proof that he was really Michael Hills.  However, we see telltale signs in the hair and ears that the photo on this passport was manipulated.   Karen said “because I told him I didn’t believe who he said he was he wouldn’t send me any instant selfies. I guess he thought if I saw a passport it would prove his identity. He is still now trying to tell me I’m wrong and that I will regret this day of losing him. Haha, he’s persistent to say the least!” (Click to enlarge.) 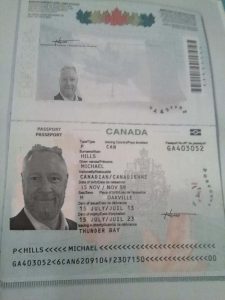 Most importantly, we know for a fact that “Michael Hills” is a fraud because we discovered that his photos were stolen from a well known Realtor named Colm Glass.  You can see a couple of the images of Mr. Glass, including one that the scammer sent to Karen, by visiting these realty websites where Mr. Glass offers his services:

When Karen called him out on this fraud, “Michael Hills” claimed that the professional realtor Colm Glass had catfished Michael’s identity!  We found one of the stolen “Michael Hills” photos from above on the real Colm Glass’ Facebook account.  It was posted in 2017: 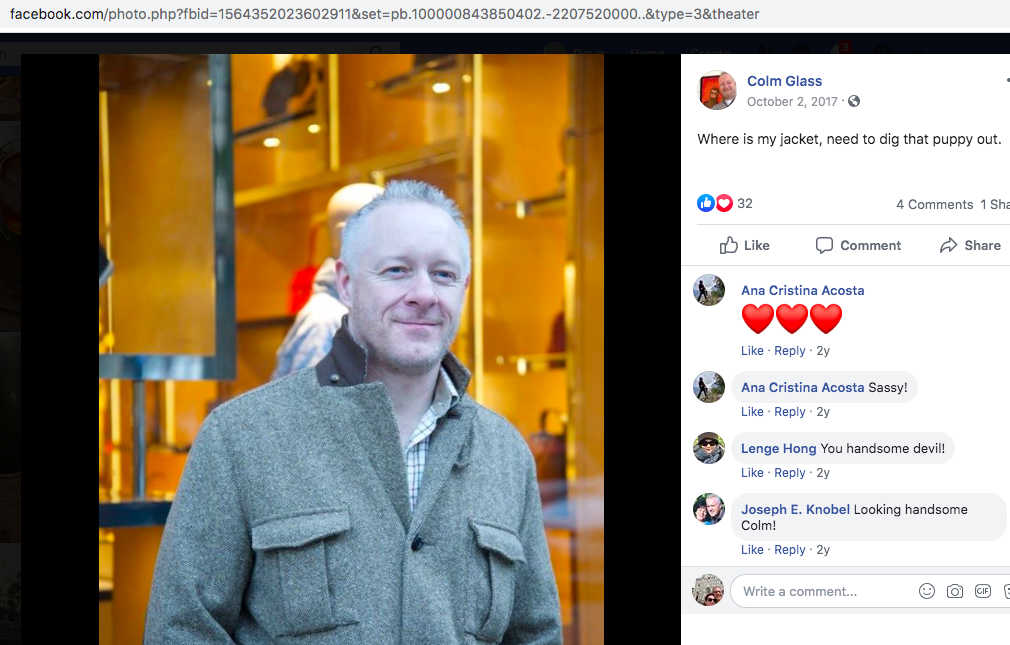 Mr. Harare, Zimbabwe Love Scammer also used this photo of Mr. Glass, taken in front of a store window, when he created a fake LinkedIn account with the fake name “Michael Hills.” (Click to enlarge.) 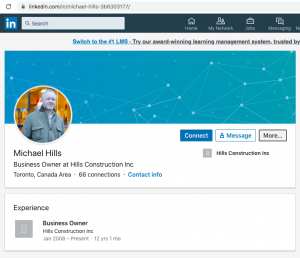 This scammer also posted Colm Glass’ photo, taken from his Realty firm, onto his fake Hills Inc. Construction website.  If you look carefully at this screenshot from the Hills Inc Construction website, you can see a German Realty firm logo in the background, called “Engles & Volker.” This stolen photo was taken from their Engel & Völkers Pinterest account. (Click to enlarge.) 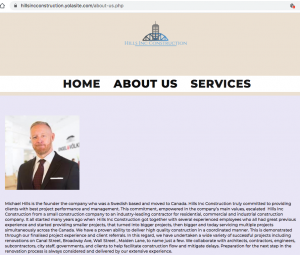 Even the text underneath the “Michael Hills” photo was stolen from the “About Us” web page of a construction site called IVIC Construction Ltd. (In fact, this scammer has stolen lots of text content from the IVIC website and used it on the Yolasite website.)  We also discovered that Mr. Harare Zimbabwe has had at least three different fake websites for Hills Inc Construction:

IMPORTANT NOTE: When we visited HillsPropertiesInc.com on May 11, 2020 the CEO listed on this website was “Michael Hills.”  The image of Michael Hills (i.e. Colm Glass) was called d_team1.jpg.  When we returned to this website on August 4, 2020 the CEO listed was a NEW alias named “James Morris” – founder & CEO, “who was based in Russia and moved to USA.” The name of this image file on the website was d_team2.jpg.  Apparently, Mr. Harare, Zimbabwe has a group of images he’s ready to swap out and use.  The phone number and address now listed on this website is 862-306-8220 and 10615 National Turnpike Apt 3, Fairdale, 40118 Kentucky, USA. 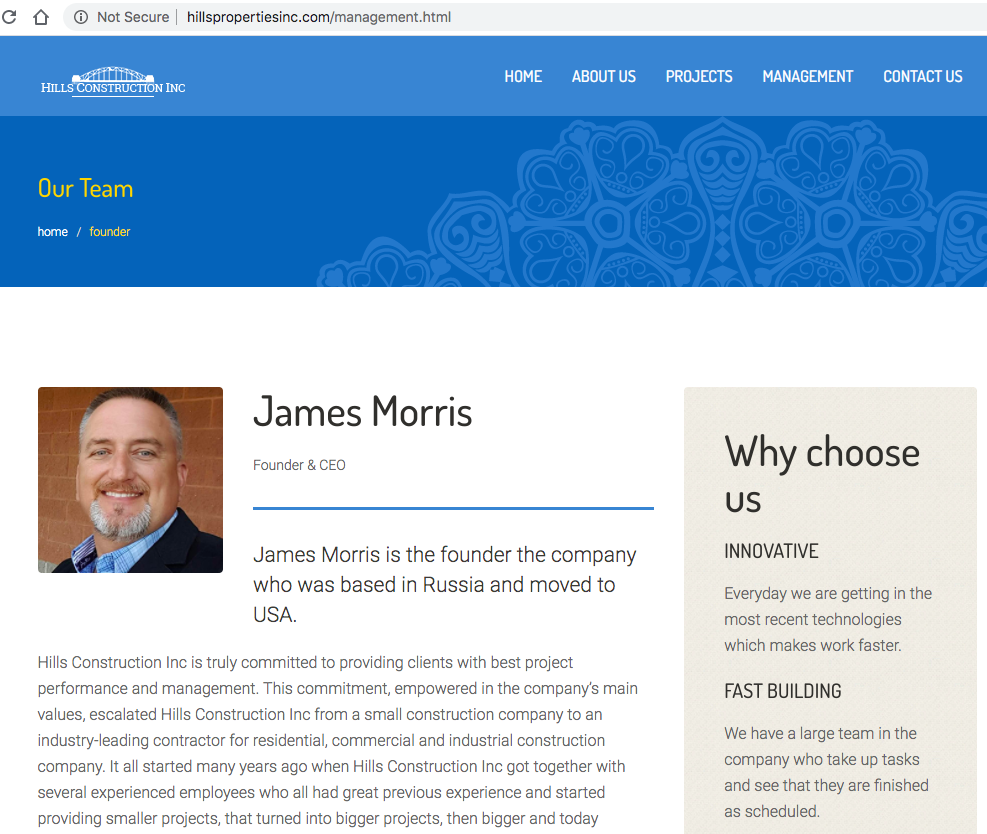 When we conducted a reverse image search with this new image of “James Morris” Google returned 6 links to identical images for James Morris.  The first was a link to James Morris, CEO on HillsPropertiesInc.com.  However, the other five identical images were found on the free dating website called Wonder.dating.  All five were linked to a man identified as “Denis Grant.” Denis Grant had been active on this dating site as recently as May 31.  **We believe that it is VERY likely that Denis Grant is a new alias being used by Mr. Harare, Zimbabwe because Denis is listed as living in Istanbul, Turkey and working as a self-employed building contractor.  These pieces of information are VERY consistent with Mr. Zimbabwe’s scam narratives.** 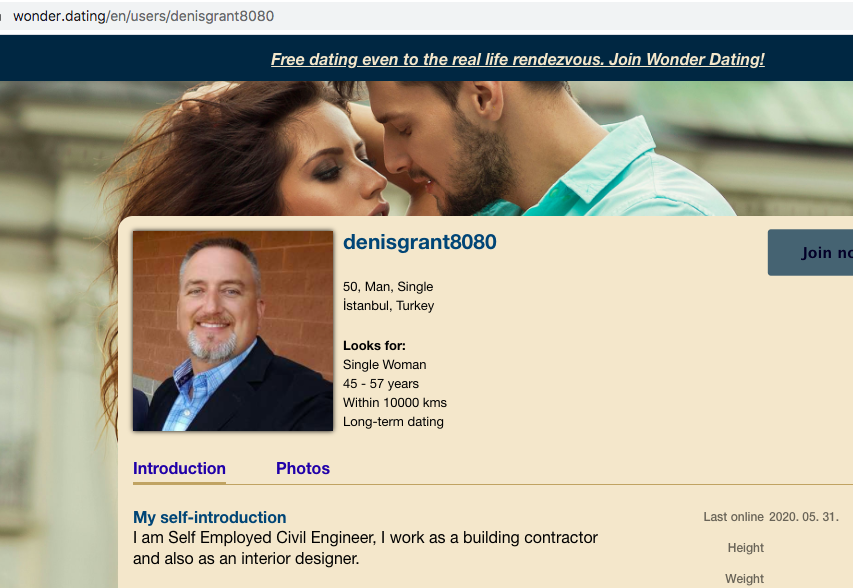 Both of the Hills Inc Construction websites showed projects that the company has presumably worked on. However, these photos are all stock images found on many websites. When we searched in May, 2020, we found the photo of the cranes at dusk used on 79 websites across the Internet.  Here are just two examples of this fraud: 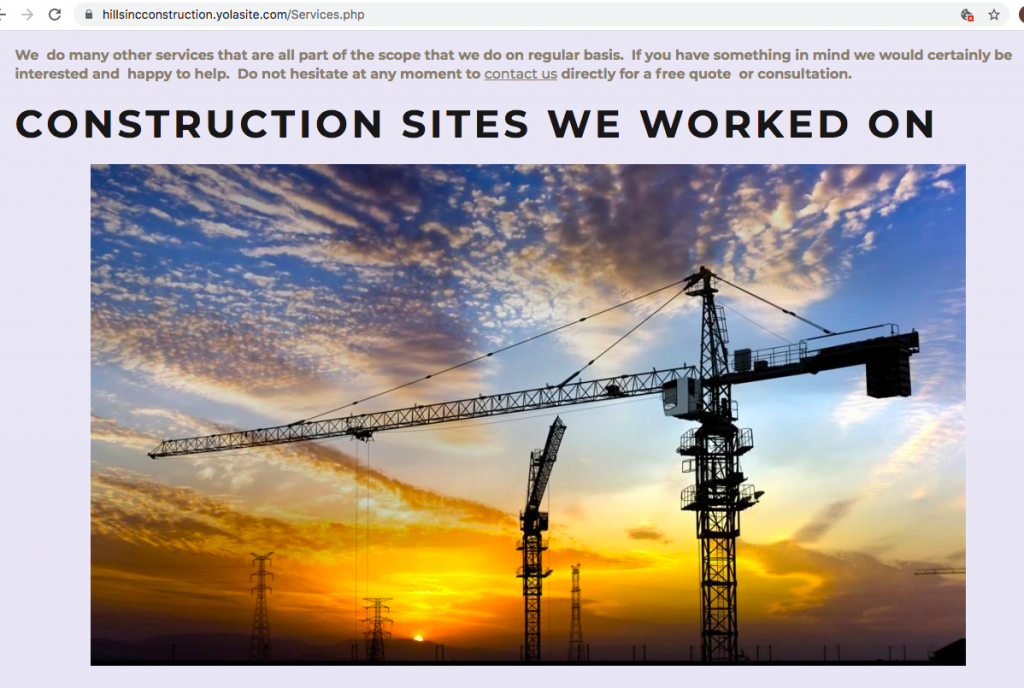 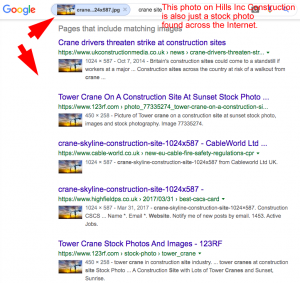 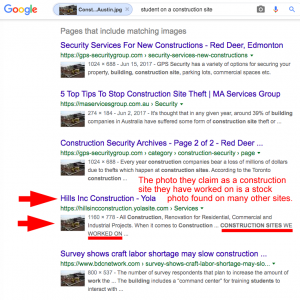 Michael Hills lists his business address in Oakville, Canada, along with his email address and phone number, on his website. If you mouse-over the phone number on his website you’ll see that it points to 555-  instead of 646-470-3984.  Also, two people identified this phone number as a scammer’s number in 2012:  https://800notes.com/Phone.aspx/1-646-470-3984.  As for that email address, there was no such domain ever registered as hillsincconstruction.com. 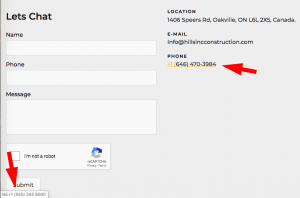 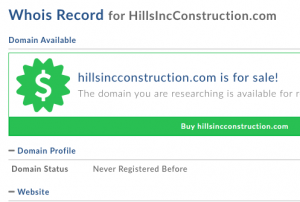 Unfortunately, Mr. Harare, Zimbabwe has also set up a fake Facebook account with Colm Glass’ photo and the name Michael Hills. But for a man born and raised in the United States, his English ain’t so good! Read the line of text under his name!  Also, we noticed that this Facebook page for “Michael Hills” actually has the name “Larry Keevn” in the Facebook link itself. 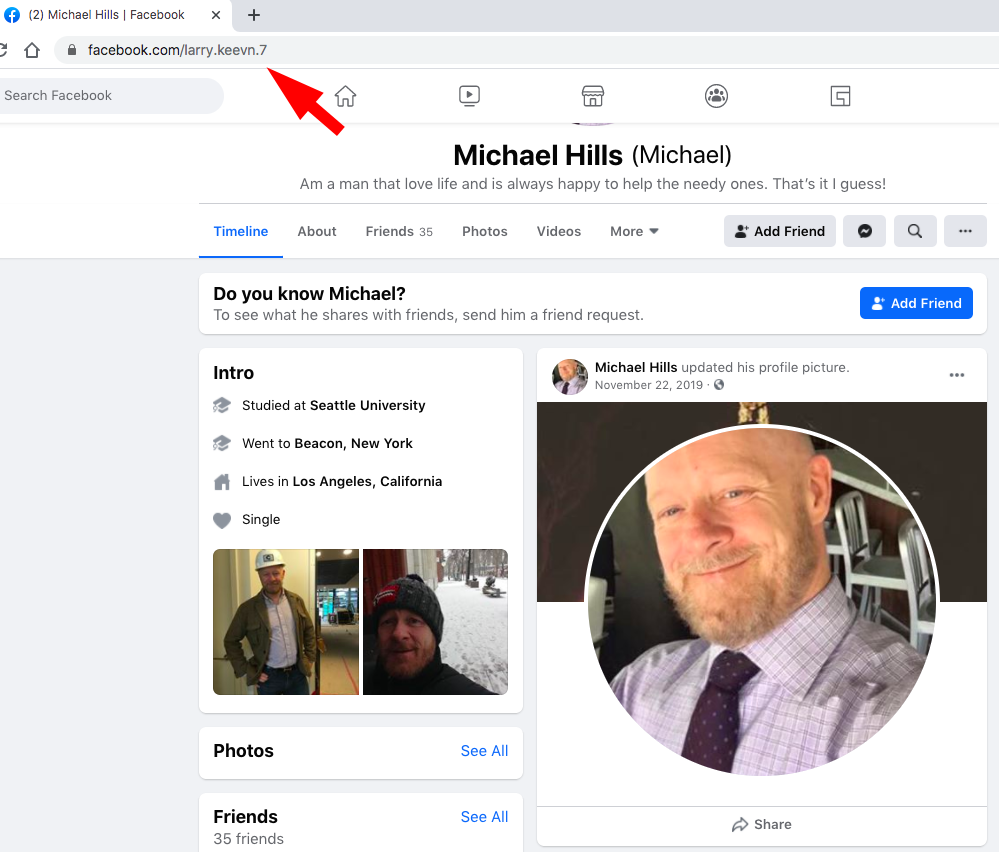 When we looked up “Larry Keevn” in Google it showed us a link to a Facebook page written in Swahili and with Michael Hills’ name on it! 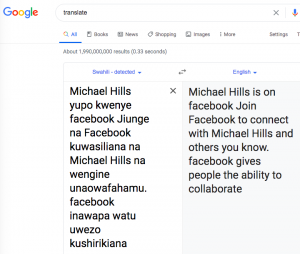 Michael Hills had 35 friends listed on his Facebook account when we visited in early August, 2020.  We found his collection of friends fascinating!  Of 35 Facebook friends, at least 22 are shown to be beautiful young women.  Together, their names & languages represented Tajikistan, Russia, Cyprus, Vietnam, Brazil, Poland and only a few from the United States.  There were only 2 photos in his Facebook account. One of them is the Eiffel Tower, the other is Colm Glass.

Mr. Harare Zimbabwe has been a busy man in his effort to victimize older women.  During the last few months we have actually heard from two other women who found our website when they Googled information about his aliases and businesses.  One of these women loaned Michael Hills more than $377,900 in various payments over months in 2019. Of course it was never paid back. But to reassure this woman that he would pay it back he sent her “Notarized Loan Agreements” each time.  Here is an image of the last loan agreement showing the full amount.  We have purposely blurred the woman’s name.  It seems obvious to us that our scammer has used this form in the past and simply re-typed the woman’s name he is currently victimizing.  Also, the signature in the lower right, meant to be Michael Hills, is clearly not Michael Hills. (Click to enlarge.) 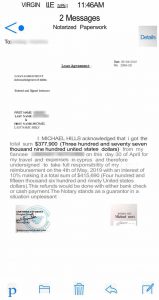 This cybercriminal from Harare, Zimbabwe has been victimizing women for several years.  We have heard from five of his victims.  In addition to the theft some of these women have suffered is the emotional pain he has also caused many of them who have come to trust and even love this leech.  We will continue to research this cybercriminal and publish our findings.