During October, 2020 a TDS reader with a Facebook account was targeted more than a dozen times with Facebook friend requests from men that she didn’t know. Often, the general public doesn’t understand how terribly risky it is to share their social media accounts with strangers.  Information taken from accounts has been used to target homes for burglaries, identity theft, contact lists of friends & families targeted with malicious links or scam websites, and more.  Take a look below as we review a number of these men who contacted the woman who reported these friend requests to us. We’ll call her “Faith” to protect her identity. Keep in mind that these are just some of them.  We discovered that most of these accounts we explored was a fake account using stolen photos from a real person.  Join us below as we point out the signs of fraud in these accounts!

The first thing we noticed about nearly every one of these fake Facebook accounts is that the actual link to the account contained the name of someone else, often a foreign sounding name.  For example, Faith sent us the link to an invitation she received from Marcus Tanner.  But Marcus Tanner’s link was:

https://facebook.com/belange.betoko.58 and appeared to have been created for someone called Betoko Belange. (Though it is customary for Americans to post a surname last, many cultures, including many in Africa, post the surnames first.  Hence “belange betoko” instead of Betoko Belange.)

Another major red flag to this public Facebook account, was the fact that it contained no information about Marcus and only one photo! 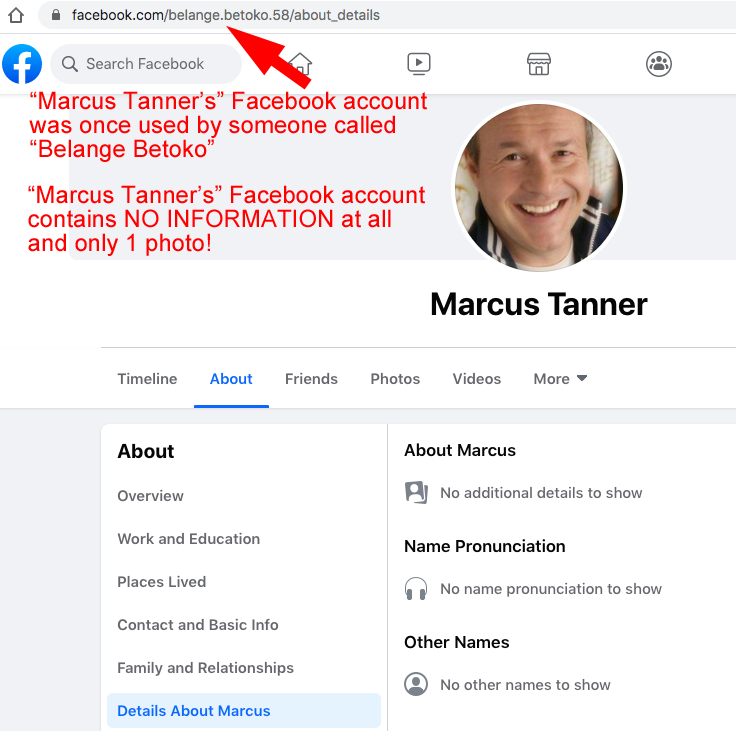 We took that one photo and conducted a reverse image search using Google. We discovered lots of copies of the photo, especially on websites in Denmark.  That’s because the photo was stolen from a Danish DJ, TV presenter and radio host named Dan Rachlin.  Once we figured out the true source of the image it was extremely easy to find many photos of Dan to confirm he was not “Marcus Tanner.”  Below is just one photo to show you what we mean.  Or check out this article on DatingScammer.info about the romance scams using Dan’s stolen images. 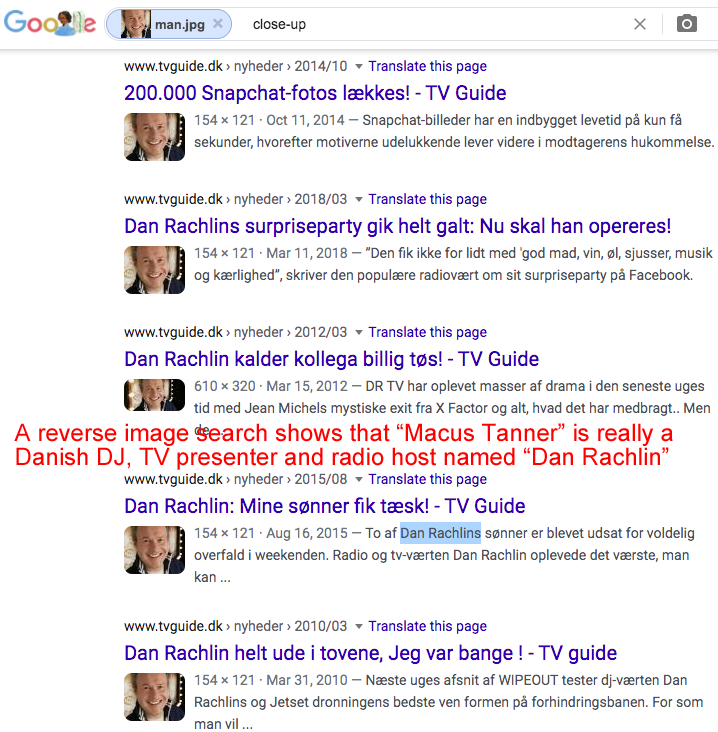 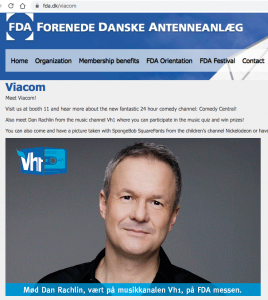 Becker Bob or Bob Becker is another fraud. The Facebook account was listed as facebook.com/sobur.mia.7906.  Little information about “Bob” is found on his account but we can see that he is widowed, a Patriot and “General of the Army (USA).” Besides this information, Bob’s account was nearly empty of any other information and the ONLY posts to his account occurred in the second half of October.

Bob’s account also included only 3 photos. When we conducted a reverse image search of that sweet photo of “Bob” with his dog, we found LOTS of copies on websites associated with Romance Scams, as well as references to the REAL owner of that photo.  The stolen image was taken from Sargent David Becker, a Chaplain of the U.S. Army.  Apparently, romance scammers have been using images of the real David Becker for about ten years in support of their scams.  You can read a long running discussion of this fraud on Quora.com in an article titled “How do I find out if David Becker in Kabul, Afghanistan is real?” 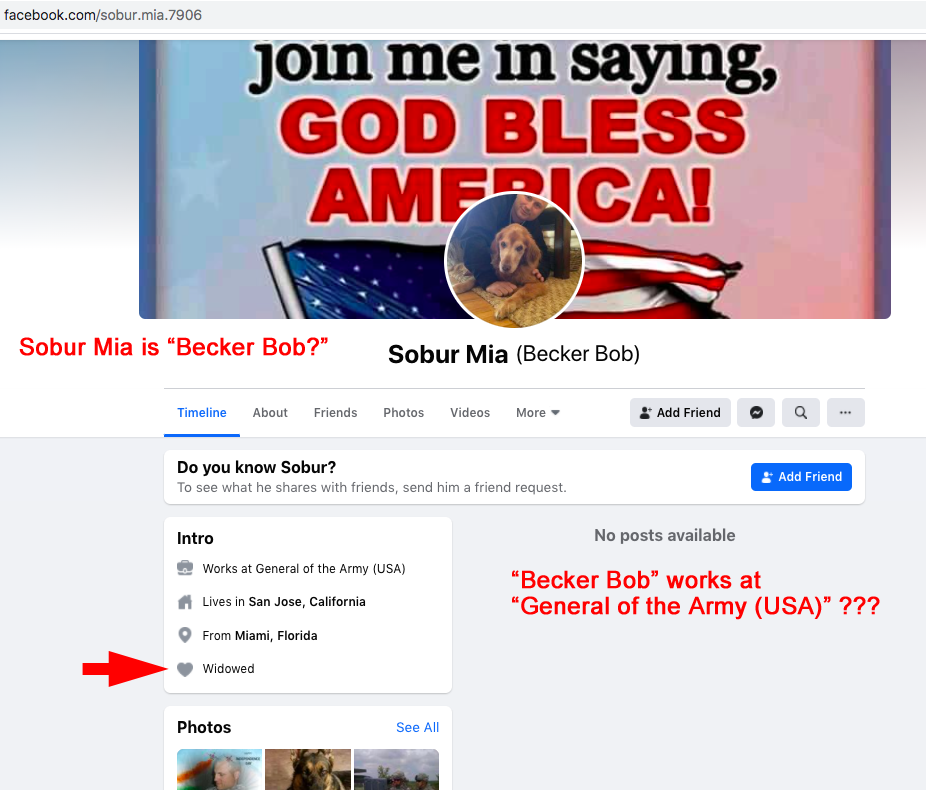 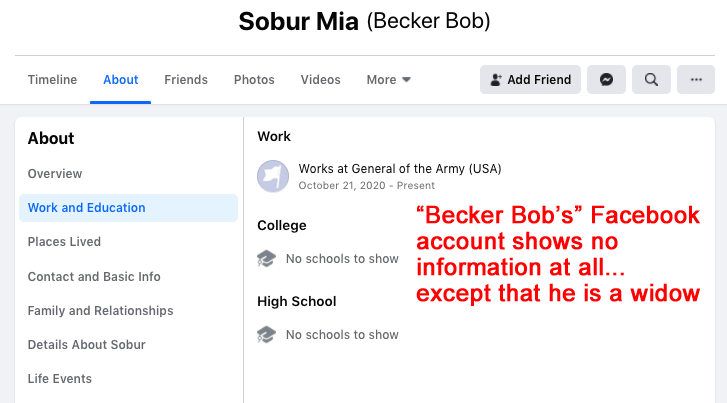 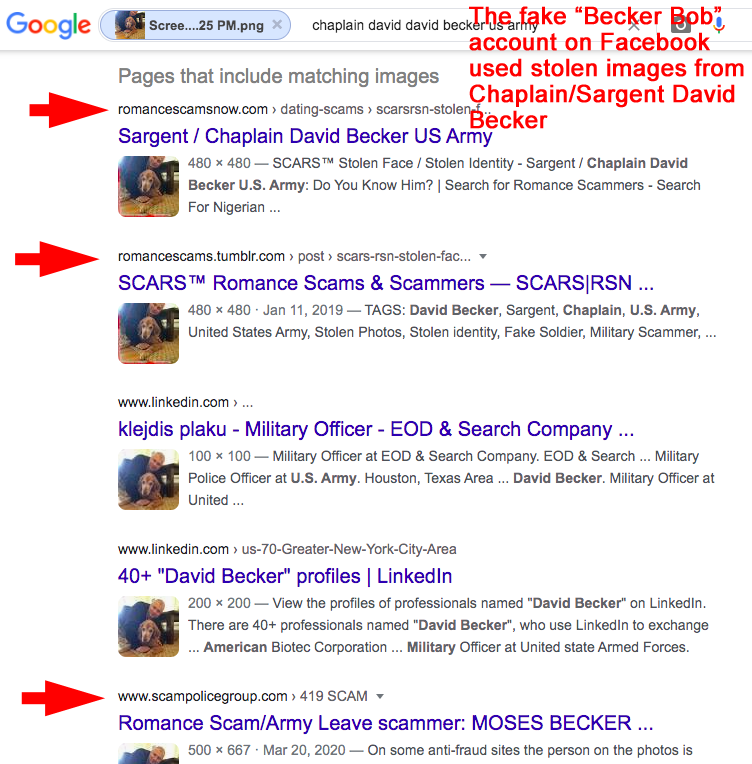 Brian’s Facebook account is associated with the name “Fath Ovbude.” Like all Facebook Phonies, Brian’s account showed no friends or personal information whatsoever, and yet his account was open to the public.  Brian had no family or education posted, only that he was widowed.  But “Brian” did post 5 photos in October and when we conducted a reverse image search on that photo of Brian with his adorable little dog, we learned that “Brian” is really a Frenchman named Justin Chesnot. The very REAL Justin Chesnot has a Twitter account and Instagram account. 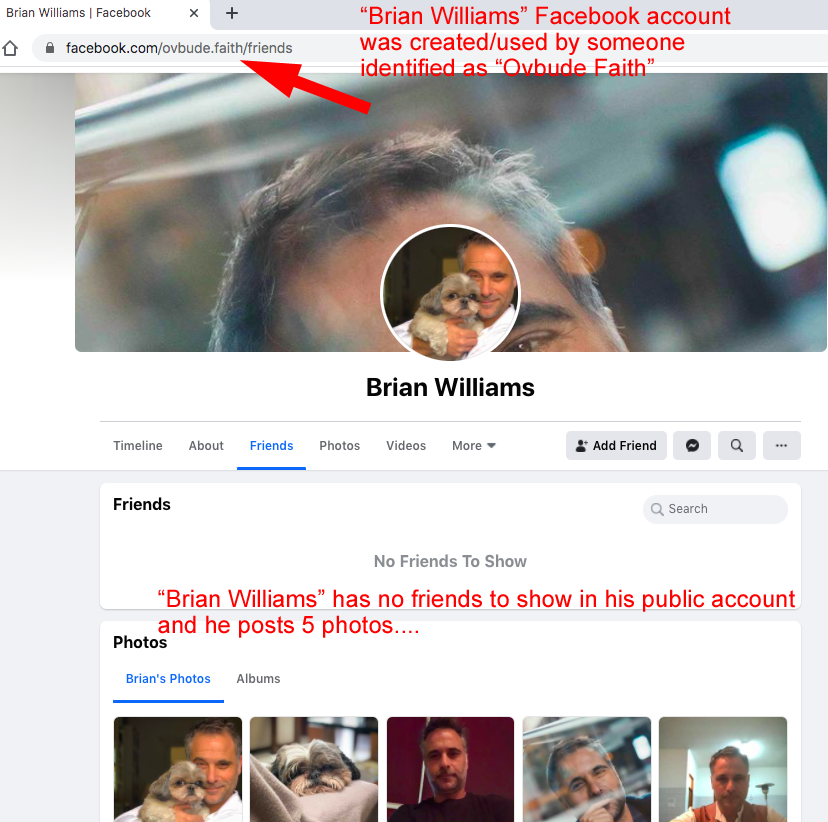 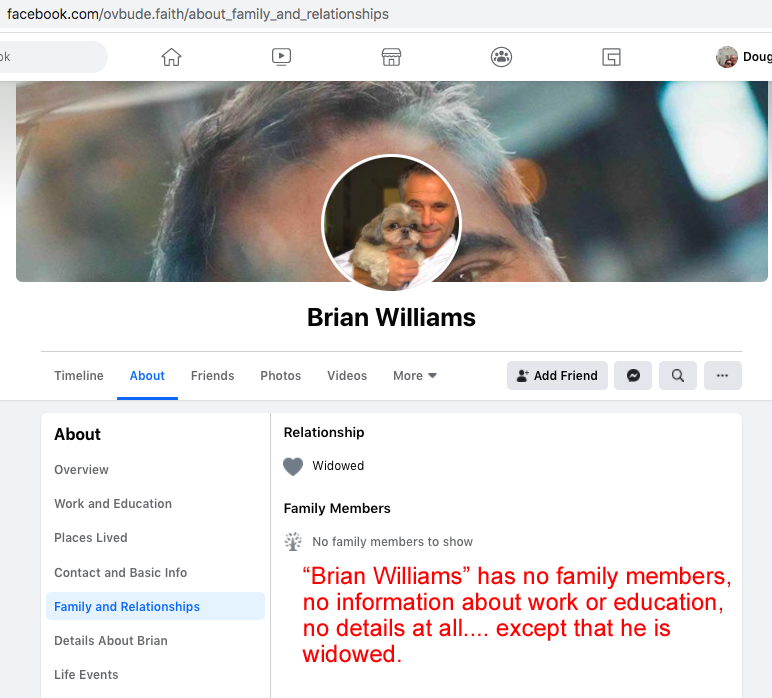 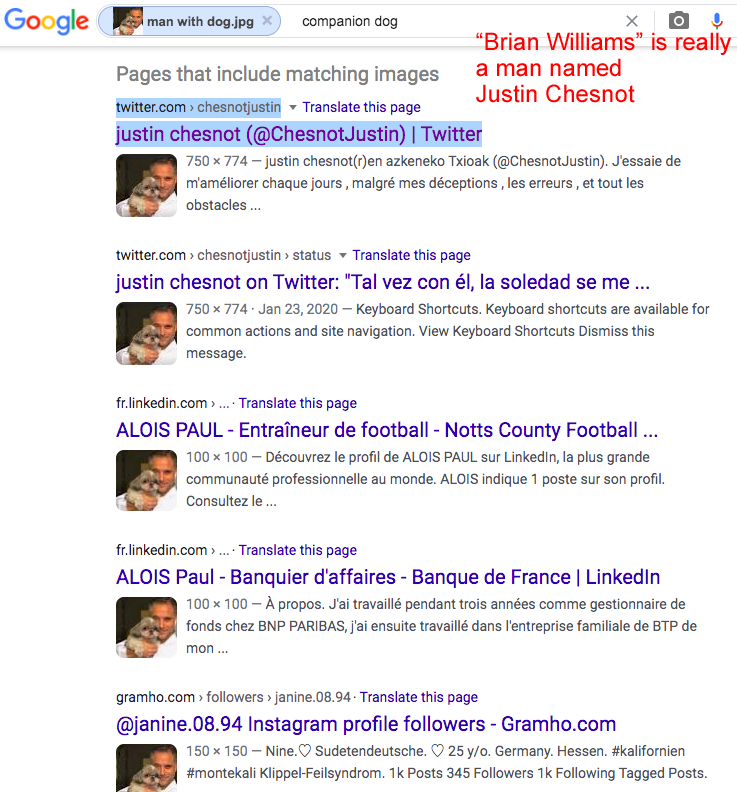 Kevin David’s Facebook account has ZERO information at all.  NO friends, no posts, and only 1 photo.  But the account is associated with the name “alicia kumar.” Once again, it took no effort at all to conduct a reverse image search of that cute photo with his dog to show that the image was stolen from a man named Joe Cross, also known as “Joe the Juicer” because of his VERY public Facebook account as “Joe the Juicer.” 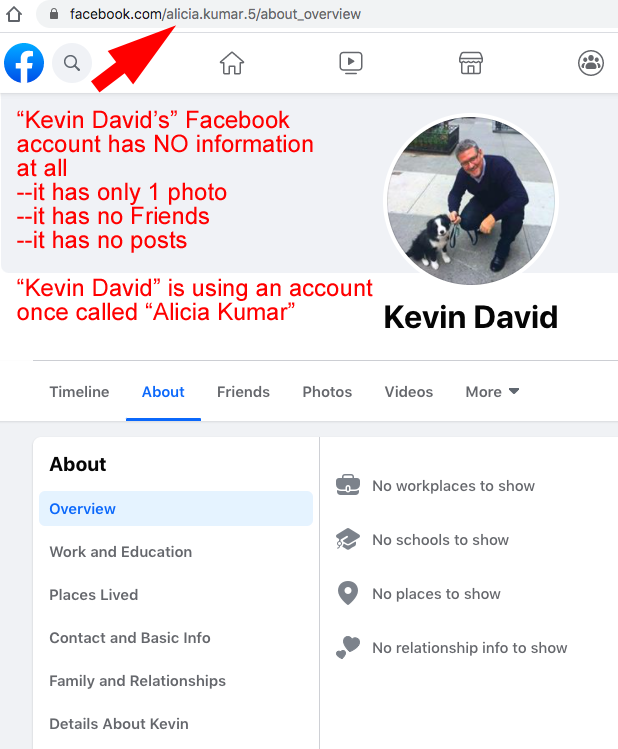 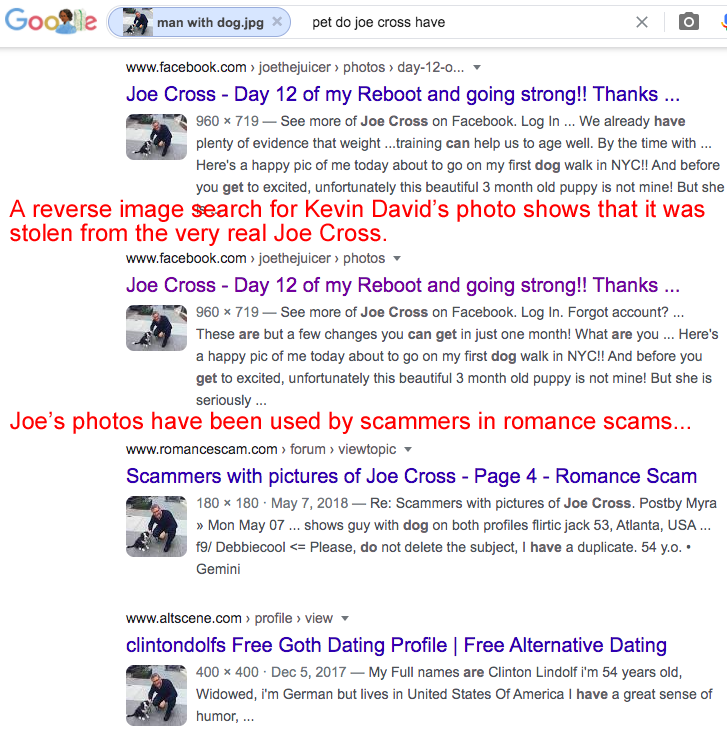 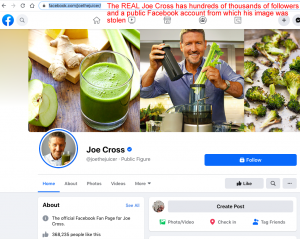 Harry’s Facebook account is also associated with the name “Abdurohman Yesuf Dawed” –how very strange!  Once again, the account contained no other friends, but unlike the others above, a lot of personal information was posted about Abdu, er… we mean Harry, including his education and where he lives.  But oddly enough, all of the images posted were put up just a few days before Faith, our TDS reader bombarded by these friend requests, notified us of this invitation.

The photos of “Harry Hendrick” were so absurdly easy to conduct a reverse image search that it took us only seconds to discover that they were stolen from a plastic surgeon in Columbia, South America named Dr. Juan Esteban Sierra. 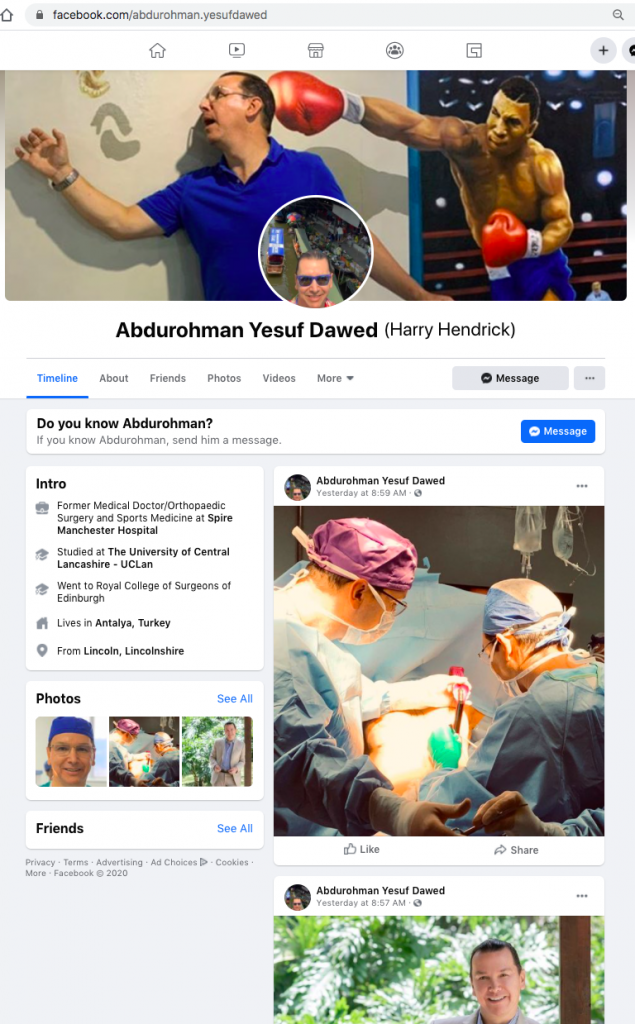 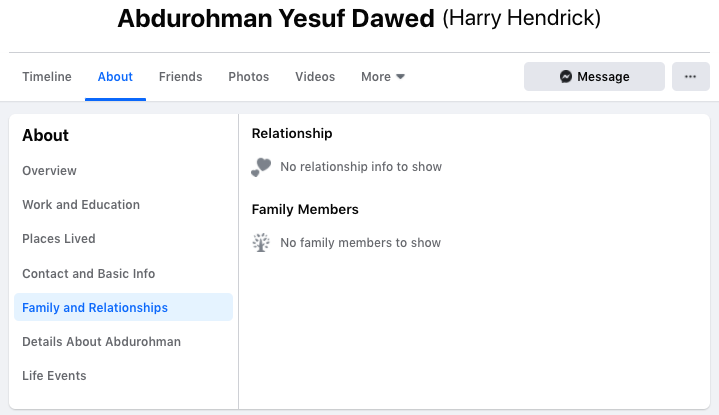 This next Facebook friend invitation came from a particularly odd account because the account contained absolutely almost NO information whatsoever, including photos. The only information were two references to living in Poland.  The account claims to be for someone named “Mikiyas Duguma” but is associated with the name “eskindir naano” according to the Facebook link.  The one image posted to the account was a map of Ethiopia in the colors of the Ethiopian flag, posted on October 14, 2020. 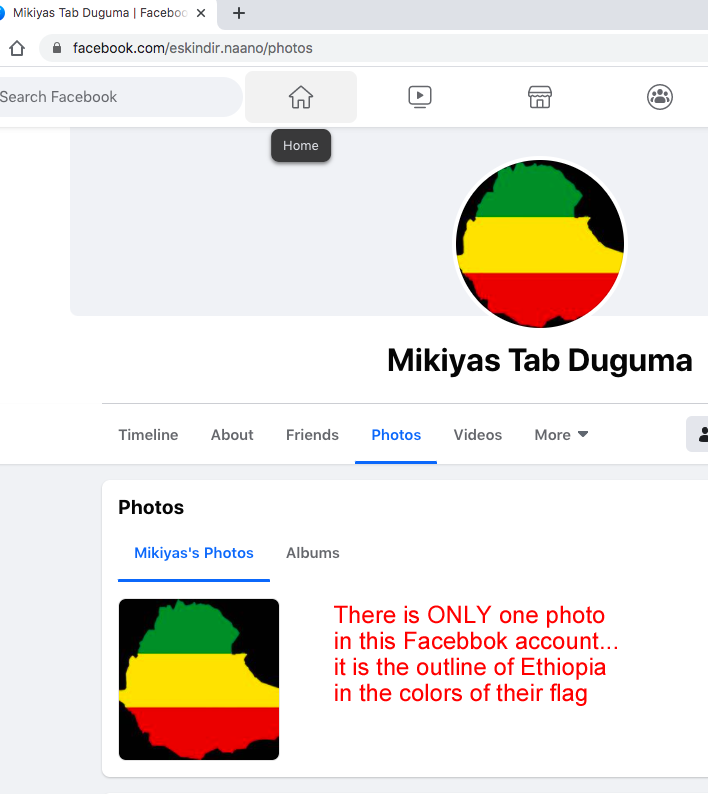 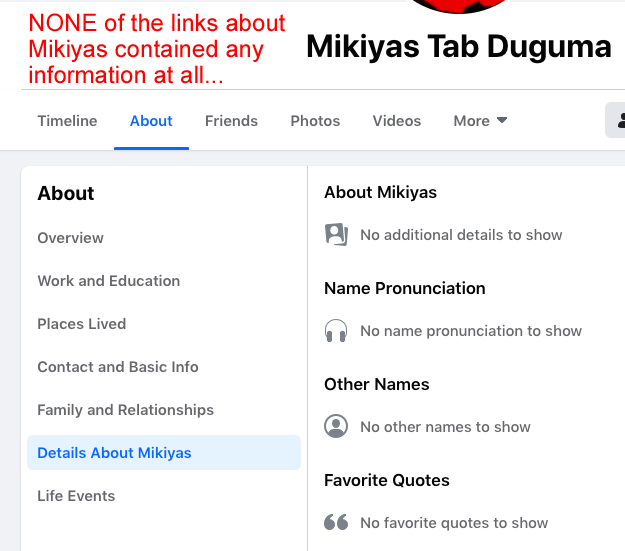 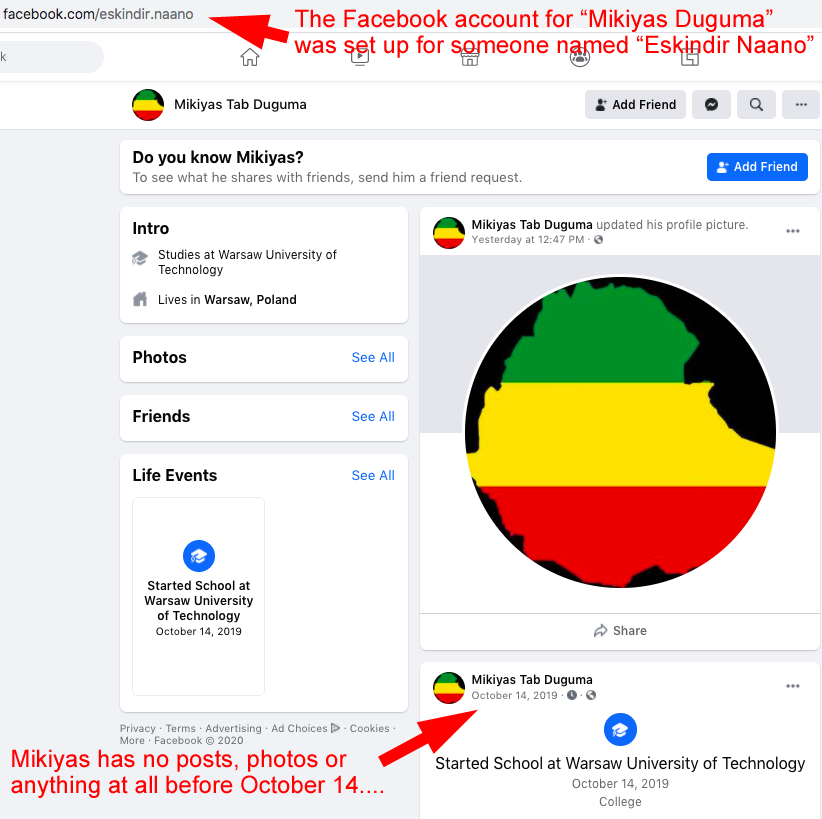 Though we could not determine whether this next account was fraudulent, we are VERY suspicious and believe it is likely.  Here’s why: 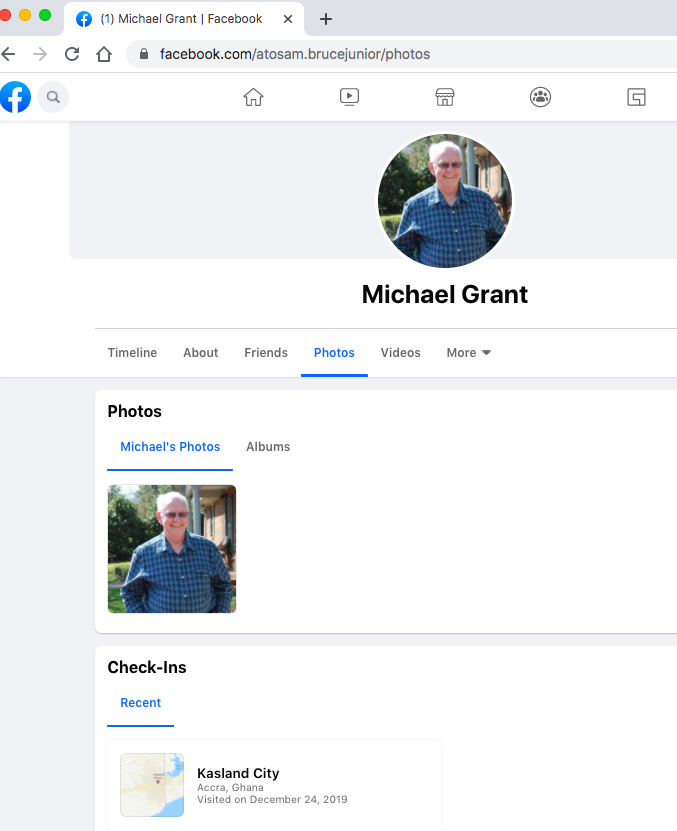 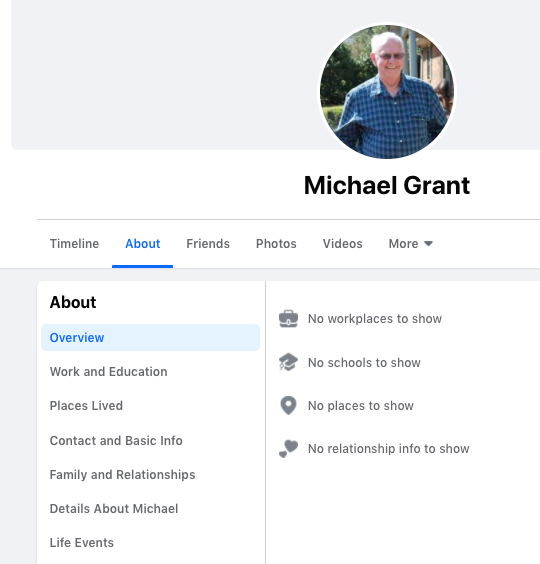 We leave you with Faith’s latest friend request from a stranger.  It was sent to her on Sunday, October 25, 2020 from Jamie Biden, aka “Hemanta Koley”

OUR ADVICE: If you get friend requests from people you do not know, DON’T ACCEPT THOSE REQUESTS!  Besides romance scammers, people don’t realize that anyone who is connected to your social media account can steal LOTS of personal information about you that can be used in a wide variety of scams, including identity theft, scams targeting your social media friends, image theft, and more.  Be skeptical online!