[UPDATED BELOW 12/5/20] There has been a sudden increase in scammers pretending to be Advertising/Marketing companies and offering to pay people to wrap their cars with advertisements.  It is kind of like creating a rolling billboard.  The scammers typically offer $300 or more per week and send a check for both the first week’s pay plus extra money they tell you is needed to send to the “company” who will be putting the ad onto the car.  The victim is instructed to deposit the check and wire/send the money to the company hired to place the ad on the owner’s car.

Except the check is fake and bounces in about week or so.  In the meantime the victim has sent his or her real hard-earned money to the scammer.  Ads look something like this…

MAKE MONEY WITH YOUR CAR OR TRUCK

There are lots of websites across the Internet informing people about this scam and one Reddit user recently posted this “So there was a CraigsList ad, but unlike the usual ones, this one wants me to go to a place to get my car wrapped with an ad. But they sent me a check for $1,950, saying it was for the wrap and first 2 weeks payment. Scam?”  NO ONE is going to send a large check to a stranger in advance without lots of guarantees and building a relationship, including voice/skype conversations, etc.  This is nothing more than a variation of the same old advance-fee fake check scam.
UPDATE 3/11/21: On March 11, a woman shared the following text with us that she received from 443-735-0576, a number she didn’t recognize.  The text sender identifies herself as “Cynthis Perez.” (No doubt a misspelling of Cynthia) Ms. Perez claims to have found the woman’s resume on LinkedIn, which is a lie because she hasn’t posted her resume online since she is gainfully employed!  No matter! The woman is invited to apply for a job with Nokia Corporation and given a shortened link to click.  We discovered that this shortened link will redirect the woman to a WordPress website that has been blacklisted by Yandex and called rabbittrufflejanus43867[.]wordpress[.]com. 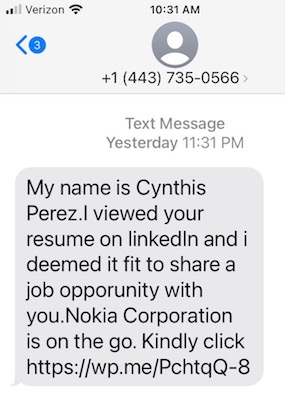 The job posted on this rascally rabbit web page is for a Car Wrap scam!  Click the image below to expand it and view the details. Victims are told they will be paid $400/week to put an Ad for Nokia Corporation on their car.  This is just an advance-check scam!

UPDATE 12/5/20: On December 5, one of our TDS readers sent us a screenshot of this text which he received.

The “bit.do” link is a shortening service.  We followed that shortened link to a form that was created in the free form service called 123formbuilder and found a “Coca Cola Promotional Campaign.”  It reads…. (Click on the screenshot below to enlarge.)

We are currently seeking to employ individual’s world wide. How would you like to make money by simply driving your car advertising for COCA COLA®. The Coca-Cola Company. Originally marketed as a temperance drink and intended as a patent medicine, it was invented in the late 19th century by John Stith Pemberton and was bought out by businessman Asa Griggs Candler, whose marketing tactics led Coca-Cola to its dominance of the world soft-drink market throughout the 20th century.The drink’s name refers to two of its original ingredients: coca leaves, and kola nuts (a source of caffeine). The current formula of Coca-Cola remains a trade secret; however, a variety of reported recipes and experimental recreations have been published.

Here’s the basic premise of the “paid to drive” concept: COCA COLA® seeks people regular citizens, professional drivers to go about their normal routine as they usually do, only with a big advert for ” COCA COLA®” plastered on your car or truck. The ads are typically vinyl decals, also known as “auto wraps,”that almost seem to be painted on the vehicle, and which will cover any portion of your car’s exterior surface.

What does the company get out of this type of ad strategy? Lots of exposure and awareness. The auto wraps tend to be colorful, eye-catching and attract lots of attention. Plus, it’s a form of advertising with a captive audience, meaning people who are stuck in traffic can’t avoid seeing the wrapped car alongside them. This program will last for 3 months and the minimum you can participate is 7 weeks.

You will be compensated with $500 per week which is essentially a “rental” payment for letting COCA COLA® use the space no fee is required from you COCA COLA® shall provide experts that would handle the advert placing and removal on your car/truck. You will receive an up front payment of $500 inform of check via courier service for accepting to carry this advert on your car. The specialists funds will be included only in your first check. Typically response within 2 hours and also check your email inbox and text message inbox for our response, ….

It is very easy and simple and no application fees required to get started, fill the form below 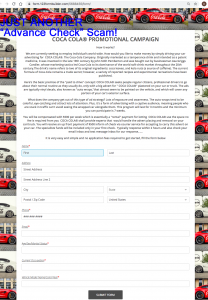 UPDATE 10/23/20: The car wrap scammers have been posting bogus job offers on various free web hosting sites like Weebly.com.  Here is a recent text received by one of our readers about this job… 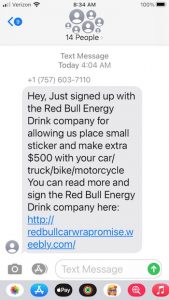 When we visited the link to the Weebly site identified as “redbullcarwrapromise” we found this description and application form.  It is FULL of grammatcial, punctuation and other errors!  Clearly, this scammer is not a native English speaker… 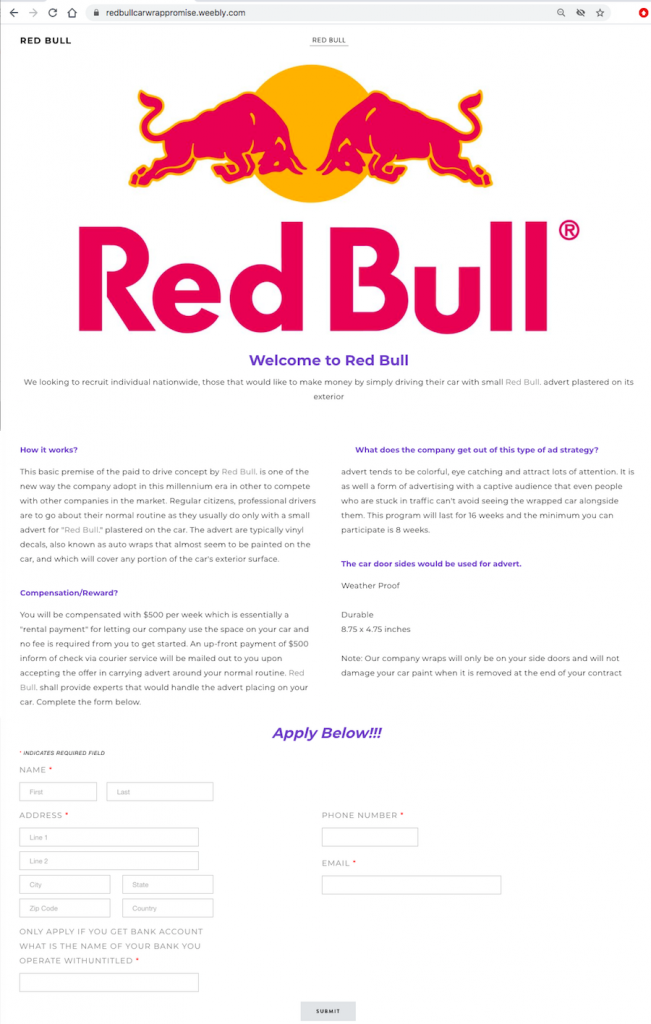 UPDATED 6/12/19:
Doug from TDS received the following email twice (45 min. apart) inviting him to join this 3 month program ($500/month) to place “advert” on this car because they are seeking “regular citizens, not professional drivers to go about their normal routine…”  Raymond Williams emailed Doug from the domain car-wrap-marketing.com.

The domain car-wrap-marketing.com certainly sounds official.  However, a Google search can’t find anything about this domain or business.  A WHOIS look up shows that this domain was registered privately, through a proxy service, on June 4, 2019 just one week before Doug got this email.  NOTHING ABOUT THIS EMAIL SOUNDS LEGITIMATE! 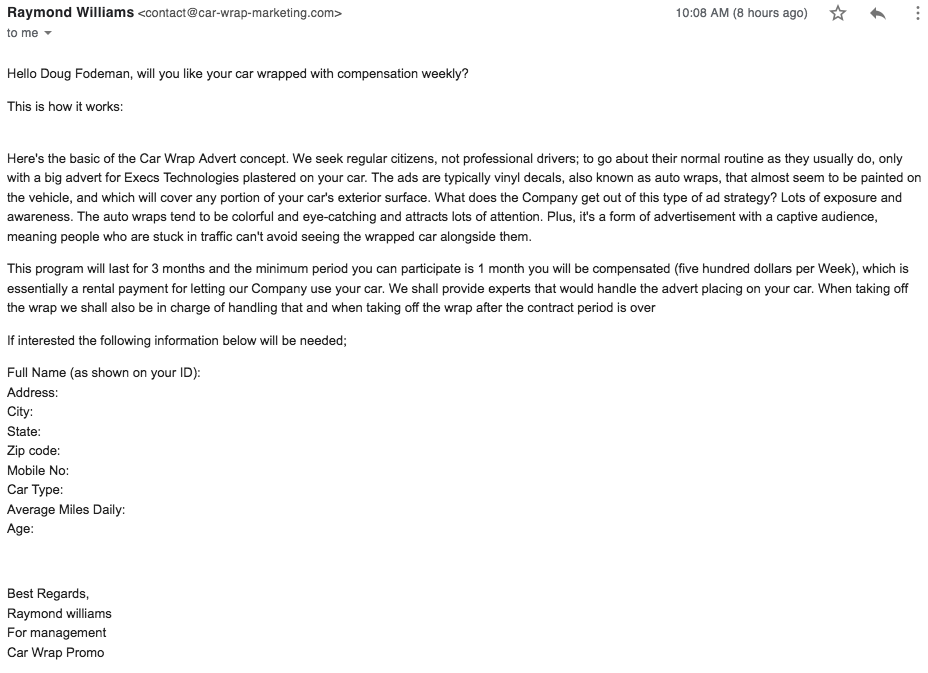 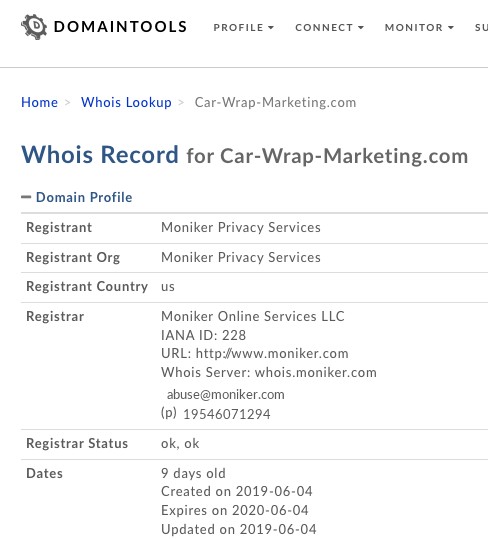 UPDATE 10/27/18:
Here’s another email for a car wrap scam, pretending to be someone from the Olympic Games! 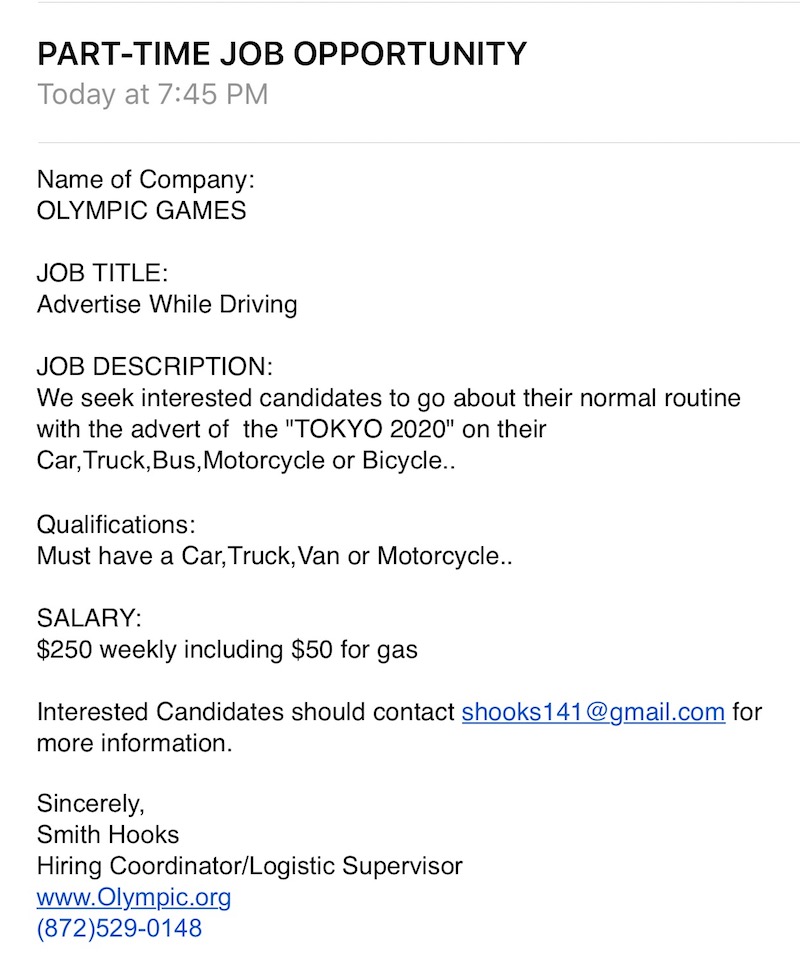 UPDATE 4/26/18:
A colleague sent us this email that was forwarded to him today.  Look very carefully at all the information in the email.  Can you spot the clever discrepancy that many readers might overlook? 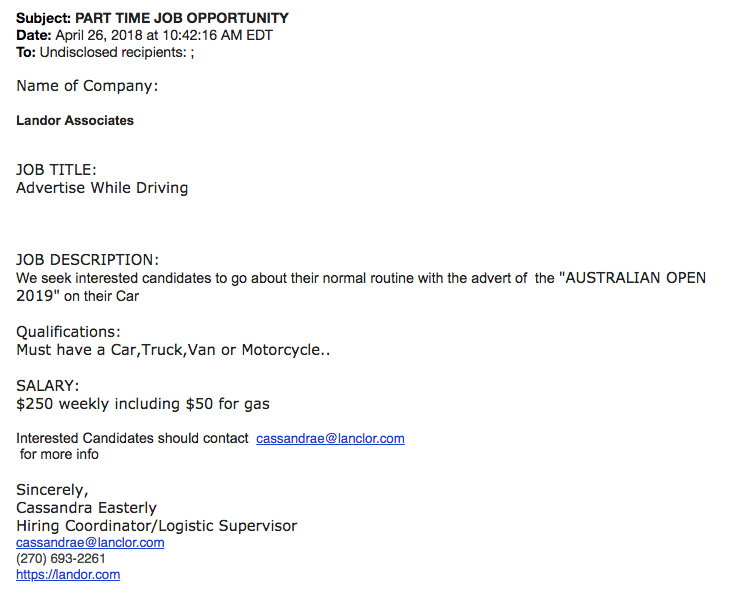 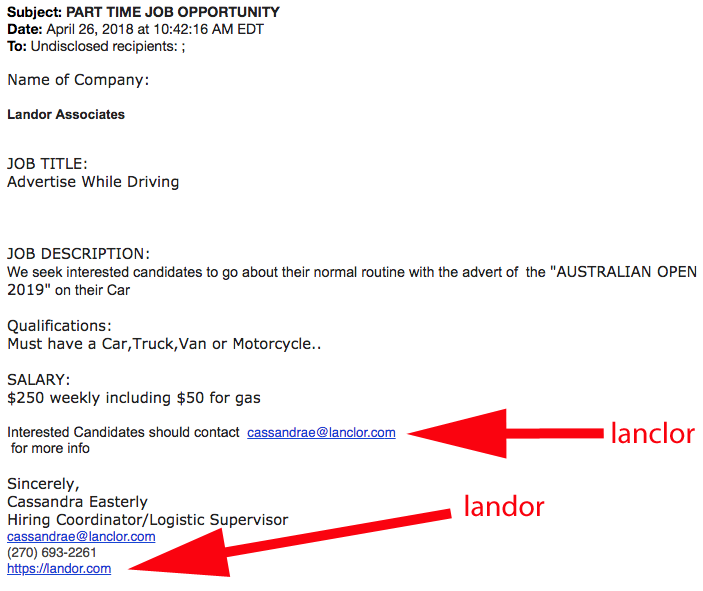 The scammers who created this email used a clever trick that is easy to miss.  The email claims to represent the firm Landor.com –> L-A-N-D-O-R .  However, the contact email given to readers is for the domain Lanclor.com –> L-A-N-C-L-O-R.
We looked up both domains, landor.com and lanclor.com in a WHOIS tool.  Landor.com is real and was registered in 1998!  Lanclor.com was registered through a private proxy service as a website the day before this email was sent.  What also makes this scam clever is the Landor.com is a real marketing firm and Landor.com is listed as the website at the bottom of the email.  It pays to read carefully!
Here are several links from around the web about this scam:
Threats Follow Fake Checks for Man Targeted in Car Wrap Scam
Car Wrap Scam from Phony Pedras Water Company
Car Wrap Scams at ScamGuard
On December 12, 2019 the Consumer.Gov website published a warning that Car Wrap Scams were targeting college students.  Read their article on this topic.